The Grains of Sand of that Summer

The Sea and   here and

How far did I walk

On the beach in summer

The grains of sand

From the soles of the feet   painful

It still feels good though

Comes to see the shells

Which was out of sight

The sound of waves

Around at the cheek

Pain coming from the feet

My feet are sinking into the sands

A grain of sand

The roll of waves of memories

As it came and went

The ward was a double room. It was strangely bright on a cloudy day. We were able to see only the crowd of sleepy buildings from the window, but the glass was a thing that made everything clear. Felt like there was a person who sees me and my mother. My mother resisted the devise attached to her throat. The deep wrinkle between her brows and the helpless expression remained there. The eyes narrowly opened. The lips partly opened. Probably because she seemed to recall the last night operation by the hospital’s staffs, the wrinkles between her brows deepened once more. The both eyes opened. As was usual, she complained about pain and remained scared at the last night’s fear. Inarticulate, grumbling breaths; the triangular eyes stopped in a moment, because she caught a movement of a figure behind the white curtain. Was the double room filled? The person in a wheel chair seemed the same age as my mother. Whenever the white curtain fluttered, my eyes caught the person’s eyes. Nay, it was an ambiguous gaze. The person might have received a strong painkiller. My mother’s grumble didn’t stop. For my careless response, she raised the voice rapidly. Although I was before my mother, I didn’t face anyone.

Grinding the teeth is

A habit from childhood, isn’t it?

The grains of sand of that summer

Come back into my mouth now

Drop a portion of the time that is reluctant to return

At the bottom of my heart.

The person’s big eyes opened more than before. When I opened the curtain, the person was facing us. They were the eyes that had just recalled something. The legs seemed to hang down before the wheel chair; nay, there was only cloth there; I’m not sure. The big eye was a big mouth as well; opened; called; being scared; began to blame us.

I closed the curtain.

She was not a good mother

I was not a good daughter

Let’s stop pretending to be a good person now

Let’s return to the grains of sand of that summer soon. 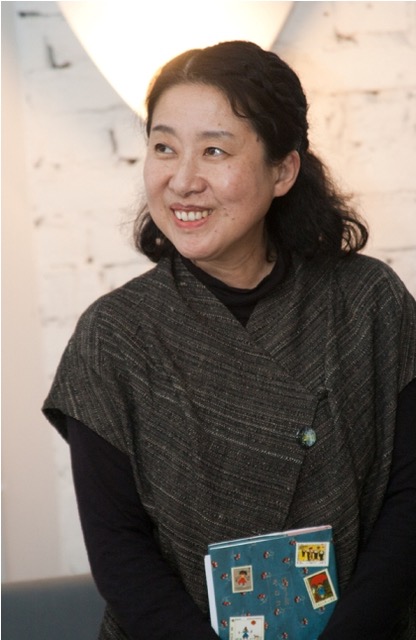 A poet. Born in Tokyo in 1956. The author of collected poems, Go Alone (Kuriurisha), Stories of Where, Who, and How(Shoshi-yamada), and Soup (ART + EAT BOOKS); collected essays, The Guardian Spirit in a Garden: Words to Remember(Quintessence Publishing) and Birds Are Always Flying (Goryu Books); and picture books, Good Morning Starshine and How Come We Call Rice "Gohan," Grandma?(Fukuinkan Shoten). A collaboration of poetry and picture, Everyday (Illustration by Kenji Inoue; switchpoint).