Rain starts to fall, the breaths
are filling the train in patches.
The empty seats harbor the presence,
after the dissolution of the figures,
like puddles.
In this slumber, the morning in disguise
is sprouting from the handle,
the fissures of its grasped-and-aged synthetic skin widen,
and the fingers curled in sanguine circulation,
grown complete with the nails
appear to pop out,
each pointing to its own end,
shifting away from me.

In the distance,
capitulation—dropped heartbeats
slip through in the direction of tomorrow, spreading rings.
The light does not form an image even with a straight gaze.
A stuck calmness, cold
buckle of the bag. I unhook it
and dive into the water—the smooth wiring of the equipment
feels like you.
I pull into this moment,
the last night’s paper covered in algae,
bearing density, responding and entangling.
Quivering in the sound of an iron pipe,
the halftone dots of soil and liquid, and the rubbles,
mixing in each other, are shaking their colors.

As we approach the destination that cannot be known,
the gravity laid in rails become thinner, and
a town factory molten in the window
regains its sooty outline. Unlike the photo,
it for now maintains its original shape,
with faintly flowing rusts.
Nearby the frosted glasses hovering over the back entrance,
the futon being dried, a person’s shadow
are suddenly swallowed.
The dark room must be so soft,
for the name yet to be woken.

By the shore across the crystal in my hands,
the droplets of steel are glaring and scratching the night sky.
The silence, seamless in the past and the future
walks and grinds the ear bones.
The instances of our voices
jump in as the doors slide—with their fragile
striking ranges, umbrellas burst open,
chasing the singular spring. 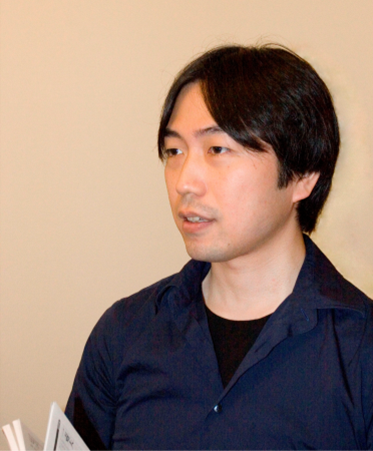 Zon Samine is a Japanese poet with an international background. He published his first volume of poetry, “Taigan-heto (translation: Crossing Water)” (Publisher: Shichosha) in 2015. Born in Tokyo, he lived in the United States for 13 years. His life in America has served as a foundation for his poetry and his deepening understanding of American poetry via communication with diverse poets. His collaboration with the contemporary composer Yuka Shibuya, providing text for pieces, has led to his interest in poetry’s interaction with music. Samine has written extensively for poetry magazines/journals including Gendaishi Techo, Eureka, and Rekitei.